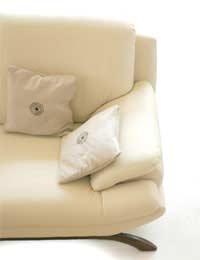 Frank ordered a new three piece suite for his family; his wife Pat and their four teenage children. They chose a 3 seater, a two seater and an armchair all of which was covered in a material they chose especially to go with the rest of their living room.

As the furniture was being custom made, it took eight weeks to arrive but they ordered just in time for Christmas. Pat and Frank were initially delighted with it and they were able to spend Christmas sitting on their new suite, with their family, friends, and their numerous pets: three dogs, and four cats.

By New Year’s Eve, the suite looked worn out. The material was starting to fade in places, looked thin and old in others, and one of the feet on the three seater had snapped off. Pat and Frank were very concerned and vowed to contact the shop that sold the furniture to them as soon as possible. They took photographs of the problems associated with the furniture as proof to show staff at the shop.

Although they did not want a refund, they did feel that they should be entitled to have the suite recovered. They showed two members of shop staff the photographs of the furniture, who were shocked at the poor condition of the suite. After other customers in the furniture showroom began to notice the discussion, the manager of the shop took Frank and Pat into the office at the rear of the shop.

Frank told the manager that considering how expensive the furniture had been, it fell far below the standards they had expected. However the manager said that his staff had advised that the material they had chosen had not been suitable for heavy use.

When the manager refused to budge, Frank went to see his solicitor who wrote a letter demanding that the sofas were re-covered free of charge, because the material that was used was obviously substandard and not ‘of reasonable quality.’ The company responded, stating that they would fix the foot but that Pat and Frank were responsible for taking reasonable care of their own furniture.

As the sofas deteriorated further he decided he had no option but to pay for them to be recovered himself. He lodged proceedings in the small claims court against the shop. At the hearing, the shop manager told the judge that Frank and Pat hadn’t wanted the shop to fix the sofa foot without replacing the covers. The judge heard from Pat and Frank, as well as the shop manager and two members of staff.

After considering all the evidence, he found that Frank and Pat should have listened to the advice of the shop staff that the material was unsuitable for heavy use. However, the standard of the material fell far below that which was reasonable, and they should have had better use out of the sofas than they did. He found that Frank and Pat were entitled to £300 compensation, which covered the cost of having the sofas recovered, plus their costs.